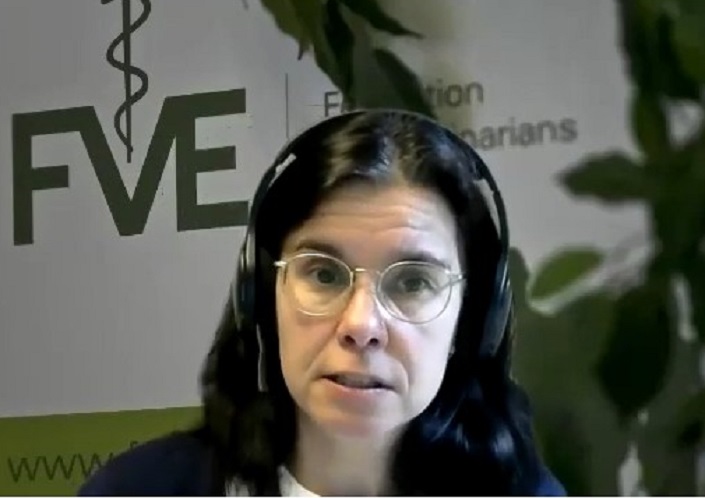 In the veterinary field, antibiotics represent a fundamental means for controlling infectious diseases, contributing to the improvement of animal welfare and the safety of food products of animal origin. When the use of these drugs, also in human medicine, is excessive or uncontrolled, they are likely to trigger the phenomena of antimicrobial resistance, an issue on which far too much disinformation is circulating.

We have spoken about this important topic with Nancy De Briyne, European Veterinary Specialist in Animal Welfare Science, Ethics and Law in Leuven, Belgium. A Ghent Vet Faculty graduate, who after working as a veterinary practitioner in Belgium and the UK, Nancy joined the Federation of Veterinarians of Europe (FVE) in 2000, specialising in medicines, antimicrobial resistance, and animal welfare. She is now the Executive Director of FVE.

Can you tell us something about antibiotic resistance and its importance for FVE, and the difference between antibiotic and antimicrobial resistance.

AMR, or Antibiotic Resistance, has been critical for many years. We are founding members of the European Platform for the Responsible Using of Medicines in Animals, EPRUMA. We have been promoting the responsible and prudent use of medicines in animals in the EU for many years. We are also part of many research projects to prevent animals from getting sick for better biosecurity and alternative use of Antimicrobial and preventive strategies to reduce AMR. Antimicrobial is a much broader term. It’s not only for bacteria but also antifungal, antiviral, antihelminth and antiprotozoal. But unlike in most antimicrobials, resistance is a problem with antibiotics, so the most important to us is antibiotic resistance, the resistance of bacteria against certain antibiotics.

Are we eating antibiotics when eating meat, milk, eggs and animal-origin products?

No, because in the EU, we have a rigorous waiting period, also called the withdrawal period, set for every medicine. This includes antibiotics, and is determined for every species of animal the antibiotic can be used on. It has been calculated how long certain medicines are in the animal’s body before it is eliminated. So, if you eat animal products, you are not eating any antibiotic residues or medicines. That is important to clarify, as fake news is circulating on social media.

Animals are still treated with antibiotics only when necessary because, like people, if an animal is sick it must be treated. Can we acquire antibiotic resistance bacteria from eating meat from antibiotic-treated animals?

It should be realised that humans, animals and our environment are one, and we are all in the same ecosystem. This means we can exchange bacteria and resistance genes from animals to people and from people to animals, for example. The same applies to food and the environment. So, it is possible to get antibiotic resistance bacteria from meat products. However, this is not a very likely route if we look at how bacterial resistance can spread. Just look at the total burden of human infections due to antibiotic-resistant bacteria. These are associated chiefly with human patients in healthcare settings, which is logical because these are where antibiotic treatments have been given to people. The use of antibiotics is correlated with resistance. Looking at the risk of human resistance from treating animals with antibiotics, the most significant threat is for people who are in very close contact with animals, for example, farmers. But regarding food, the risk is low, especially in the kitchen when good hygiene rules are followed.

Why and when are farmers using antibiotics for animals?

Farmers use antibiotics to treat bacterial infections. Because animals like people can become sick, even when livestock is raised in the best conditions, with the best feeding and housing, still like us they can become sick. And when an animal gets sick, the farmer will call the veterinarian, who will come and evaluate the situation, make the diagnosis, do some laboratory testing and then prescribe the proper treatment for the sick animal. The use of antibiotics – something which is crucial to know – is only allowed on veterinary prescription. And the use of veterinary medicines to compensate for poor hygiene in animal husbandry or poor farming is banned in EU Regulation. It is not allowed, and it is also a cost for the farmer. As veterinarians, we feel that the human health sector doesn’t understand the importance of treating animals efficiently. Treating an animal which has a bacterial disease can prevent this disease from spreading to other animals and people. It is important to treat animals for animal health and welfare but equally for public health.

You said the risk is eventually for people in close contact with animals, like farmers. Is antimicrobial resistance in humans resulting from the overuse of antibiotics in animals

Most AMR in humans is related to the use of antibiotics in humans. Which is logical. What percentage of AMR in humans is likely to be attributed to AMR in animals? Well we don’t know exactly. But if you look at all the scientific publications so far, they show that the percentage is pretty low. The most considerable burden of AMR in humans is not caused by animal use, it is caused by the use of antimicrobials in humans. And it is mainly related to healthcare settings, so hospitals or homes for older people, where there are a lot of vulnerable populations who get sicker more easily and are treated with antimicrobials. For us, it is important to stop this fight among different sectors. We are all in the same boat. We need to improve our human and animal health systems to reduce the need to use antimicrobials. The only solution is working together to have less antimicrobial use in people and animals because healthier people and healthier animals need fewer antimicrobials.

Many people take antibiotics without reason or when it is useless, such as against a virus or when they have flu. There is a lot of confusion, and we need massive information and education on that. You touched on a very important point, the necessity to work together, to stop this kind of fight between sectors. There is a massive reduction in antibiotic use in Europe in European livestock. So, I want to ask you if the human medicine sector also made the same effort to reduce antibiotic use as the livestock sector has done.

Indeed, in the animal health sector, in the veterinary sector, has been a massive reduction of 43%, and the sector is working very much towards a 50% reduction in antibiotic use. We also have a decrease in resistance. This is the real goal, of course. We want to see resistance going down. We show that this massive reduction in the animal health sector is possible, and the antimicrobial resistance is reversible. If we look at the human field, antimicrobial consumption is reported annually by the ECDC, the European Centre for Disease Prevention and Control (ESAC-Net), split into a community and in-hospital use. All the reports are on their website. Last year they also had a decline in the human use of antimicrobials, potentially caused by the pandemic, with more people staying at home, strict hygiene rules and fewer people getting sick. Still, the reduction in human use has not been at the same level as in the veterinary field.

So, we need to work together and stop blaming the livestock sector, which has made a lot of effort. Another myth is that farms use antibiotics to promote animal growth. We know that growth hormones have been forbidden for decades in Europe, and for so many years, they are not present anymore. I think they are not even produced anymore in Europe, and it’s something we hope people know. But is it true that antibiotics are still used for animal growth promotion?

No, not at all. They have been banned in Europe since 2006, and we are also surprised that sometimes people still say that. There are still non-EU countries where they are used, but in the EU, it’s been banned for a long time.

Unfortunately, no miracle solutions exist to fight AMR and this silent pandemic, but what is important is we need to move away from oversimplification, buzzwords and blaming other sectors. We need to fight AMR in all sectors where antibiotics are used, and it is good that European Union put so many research projects on it. We must not forget the global aspect. Diseases don’t respect borders. Resistance doesn’t respect borders. All sectors need to address in a one health way, because we are in the same ecosystem, on the same planet, and we only have one.

Animal health and welfare are linked